Friends originally aired from 1994-2004. I would guess I started watching it around 1998/1999 and caught up with the episodes whilst still on TV, watching the final seasons as they happened.

My love for the TV show has always been huge from collecting them on VHS yes really on VHS and constantly watching them over and over whilst having a poster on my wall! Since then I upgraded on DVD but I don’t think I actually had each season. Then going all out and buying the Blu-Ray box set with every single season and episode! Throughout all that still watching at any time on E4 then now Comedy Central. It is one of those shows that it really doesn’t matter how many times I watch each episode, I could probably quote each and every line from each episode as well!

From January 2018 the full series was added to Netflix UK following on from it being added to Netflix US last year. A very exciting start to 2018. I have naturally been watching episodes and episodes between films and other things and was outraged that millennials watching for the first time and complaining about all aspects of the show! Especially considering I have just checked that millennials range from 1982-2002 therefore I am classed as one of them being born in 1987. Let’s just say this must be the younger of the generation!

I guess then this blog post is going to be a slight response to that and a chance to totally gush about this series and the characters I have loved for so many years now! I therefore fully disagree that it is not standing the test of time as so many of the issues that were addressed throughout the show are still evident and issues now. It can really help you at different times in your life as they do touch on everything!

We are given six main characters who are a group of friends who spend most of their time drinking coffee in Central Perk. Monica is a chef and lives alone in her apartment until Rachel shows up in a wedding dress having left her soon to be husband at the altar. They went to High School together and she came to the city for help. Ross is Monica’s older brother and later we find out he went to college with Chandler, even though some of the early seasons don’t match that up. Ross has always been in love with Rachel, as she arrives his marriage is about to fall apart because his wife Carol is a lesbian and has a lover named Susan. Joey is roommates with Chandler and an aspiring actor which means he has many jobs over the years. Phoebe used to live with Monica and is certainly the wild spirit of the group. 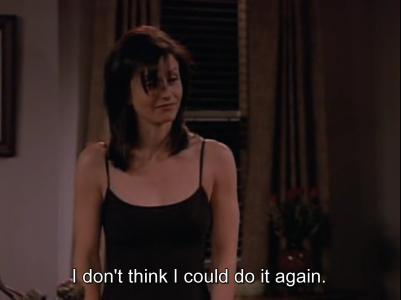 The Monica and Richard relationship was one of my favourites and most heartbreaking. Those episodes where she is attempting to deal with the break-up is such a tough period to deal with. It really does show what having your heart-broken can do to you! This might seem a very strange place to start but my current Netflix viewing is the start of the relationship, which now just makes me sad because I know how it ends for Monica.

We get so many different emotions for a comedy we aren’t constantly laughing, some of the moments are pretty serious and we can really relate to them. I will admit that I never actually realised how groundbreaking the lesbian wedding episode was and well everything else around that. Not something that had been on TV very often in the 90s. Very different now! 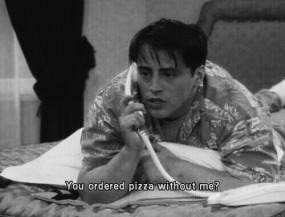 I have lost count how many times I have compared myself to Joey and his doesn’t share food view! I am very much like that as well, you can have it if I am full and finished. But seriously do not take anything off my plate! Plus his love for Pizza . . . It’s like my favourite thing ever. While I am talking about Joey though his character seemed to get sillier as the seasons go on which I found a little disappointing in terms of how good early Joey is and Matt Le Blanc’s performances.

Certain moments make more sense as you get older, that is actually what inspired me to write this, as I feel as though watching the same series through many different stages in your life and over many years you can relate to different moments and stages. Maybe just maybe when you are younger you haven’t experienced enough so you don’t really get what they are going through? I certainly felt that way watching this series and as a teenager some of the sexual references went right over my head! 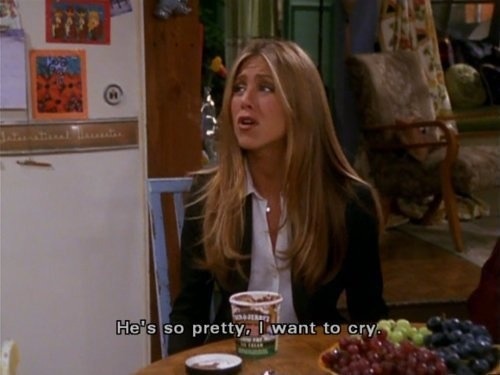 Everyone, yes, everyone wanted hair like Jennifer Aniston and that didn’t really matter which season. Although I think season one was the main one with the Rachel cut! Pretty sure I even did that myself as well. We all want Rachel to just be with Ross and for him not to blow it over and over again. She has some great moments though and we can all relate to her at so many different times. 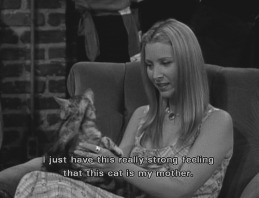 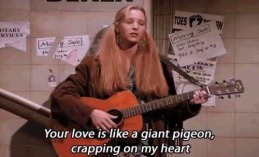 Let’s face it Lisa Kudrow as Phoebe gives everyone the biggest laughs throughout the show but she does have some great moments mixed in with that. If you haven’t tried running like Phoebe then you really have not lived at all, its honestly amazing go do it now! She has such great growth as a character as well which I think is one of the most enjoyable to watch throughout the ten years.

So what better way to finish my Friends love in that a great hug between Joey and Chandler, something we get many times and each time it will make you smile and feel happy!

Who else is with me and still loves Friends?

9 thoughts on “Why I still love Friends as much as ever!”