The beauty about a play is that no matter how many years have passed that it was first performed everything is still so relevant in your present day. That meaning you can still take so many things from it and relate it to events which have happened in your own life. The story in the this play focuses on three friends and how one event threatens to destroy years worth of friendship.

Art is primarily about a white painting. Yes, a white painting. White canvas, with white paint on it. This causes a series of events to unfold with three friends that pretty much ends in disaster as arguments and feelings built up over the years come flooding out. That happening in a hilarious and over dramatic manner. Again that is something that you can fully relate to as isn’t that something everyone generally does in life? When an event gets too serious we resort to humour and saying the totally wrong thing at the right time to lighten the mood. 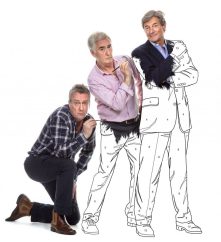 Three very well-known actors have taken on the roles. Denis Lawson as Marc who is very up tight and believes his views are always right and can never be wrong. Hence thinking that Serge spent 200k on a painting being absolutely ridiculous and told him just that! Nigel Havers as Serge was as delightful as I expected from the extremely charismatic actor. Clashing with his best friend of many years when he does not understand the painting. We then get Stephen Tompkinson who was utterly outstanding as Yvan the man who is always caught in the middle and just takes everything they say. Until of course they cause a slight breakdown, as he cannot cope with his up and coming marriage and the stress that has put on him.

At times though watching you wonder how they have even stayed friends for so long when all three don’t seem to have very much in common at all, but I guess that is all part of it. Sometimes you have to be different to your friends as you would clash more often! Just don’t get into talking about a painting . . .

I throughly enjoyed the play and the performances which really showcased just how talented the trio are, all very well-known from different performances on TV in the UK it really is such a perfect touring cast for a very powerful and thought-provoking play. It is fully engaging from the first moment and has a running time of 90 minutes without an interval and without even much of a pause. Just a very small couple of changes between houses which is easily shown by a different painting on the wall.

While the breakdown in the relationships come about it is quite interesting to think that just because you have a different view and opinion as someone else that it could then push you so far to not wanting to continue a friendship. Although I guess in this case the price of the painting did not help the situation. The play was first performed in 1994 with it making its West End debut in 1996 after being translation from French. Still holding up for all the right reasons in 2018, I really found myself impressed and right into this interesting take on friendship and how you see things!

One thought on “Art, the Play (UK Tour) Review”