The music and story about the rise of The Kinks is a fantastic experience, containing many of the hits the band had over the years. Showing the rise to fame from the very British band back in the 1960s and how from man Ray Davies had a very unique method in writing the songs. Well they just seem to happen and come to him, whilst also trying to keep his younger brother Dave on the straight and narrow. Ok well he had no chance of that really with him being thrown into the limelight as a teenager.

The show has a great pace and actually reaches a length of 2 hours and 45 minutes (including interval) and getting the audience involved at the end as the band perform at Maddison Square Garden. It takes into consideration the impact mangers and record labels had on what the artists would actually make from songs they were writing and performing themselves. I am not sure exactly how much that has changed but certainly a very important aspect of the story. 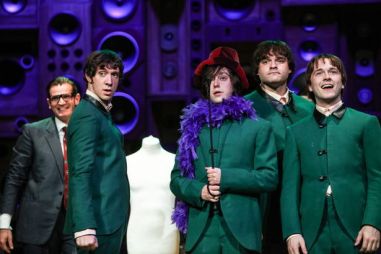 Ray didn’t seem to have much of an interest for the fame and touring side to being in the band, especially when they decide to crack America but with the unions and having to pay to play in certain places the band seem to come off even worse from the attempt. We get plenty of mentions to other bands of the era as well mainly though The Beatles and The Rolling Stones.

While I do know a lot of the songs I had no idea on the back story of the band and it also introduced me to some different songs as well. That has to be a massive plus of a Jukebox Musical. Certainly one of the best ones I have had the pleasure of watching as well. It reminded me of how 20th Century Boy was put together, the wonderful Marc Bolan/T-Rex musical that seems to have disappeared after its UK tour in 2014. So classic rock music seems to work very well as a musical.

The show is very loud at times and that is certainly how rock music should be played. It was very impressive to see the use of different guitars among other instruments as well throughout the show. I do like seeing the actors also play on stage, in a musical like this it gives it that extra edge and really pushes it on even more, as the playing is just as important as the lyrics in this case.

Ryan O’Donnell is outstanding as Ray, I don’t think he is ever actually off stage from start to finish? I cannot remember him not being there. I thought he had a great vocal range for the different songs and worked very well with Mark Newnham as his crazy brother Dave the Rave. Who certainly adds some rather amusing moments to lighten the mood when things start to get serious.

I also liked that it did not rely too heavily on the romance for Ray and Rasa, it was mentioned and how it threatened to change everything when they were quickly married but it wasn’t a huge portion of the show which was a good thing in my opinion. It was more about the music and the struggle. I loved the build up to hearing Sunny Afternoon and how it mentioned the 1966 World Cup Final, was a nice moment.

At the end when the audience got to become the crowd at a “concert” the noise level in the theatre was massive. Just showing how well this type of musical can do, it was fantastic to see so many people throughly enjoying the experience was was possibly one of their favourite bands. Bringing the music back and for myself to a new generation, I certainly want to go back through The Kinks catalogue and appreciate the band even more.

I really do recommend that you catch this on it’s UK Tour as it is going until May 2017! Also a few weeks left to catch it in the West End.