Back for a second season our struggling teenagers have still not quite managed to work out puberty and the awkwardness of growing up. Things aren’t looking any better for Nick!

I actually feel as though this second season has pretty much picked up where the first left off but managing to be even better in all honesty. Highlighting how it is different for everyone and that each person has their own timing for things to happen. It tried to be informative with the episode surrounding contraception and how to prevent STDs, but while doing that also poking fun that people will probably complain about the manner in which it was done.

The incredible David Thewlis lends his voice to the Shame Wizard who is a new addition to the series. I thought this was a good one as well considering shame is probably the worst feeling you will have when you are a teenager. Caused by so many different things and events as well, nothing really being able to prevent the shame. He pops up at all different times, highlighting how they should be feeling shame depending on their actions towards others. 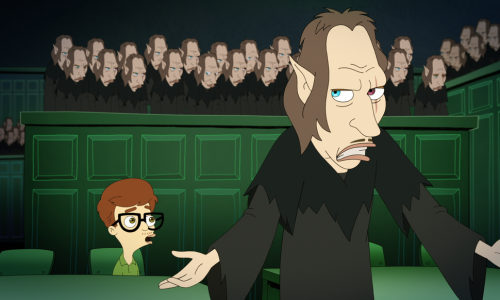 The group of friends really do manage to help each other through the difficult times even though they accidentally make things extra tricky for each other at the same time. Not realising that spreading rumours is not the best idea in the world. The series does highlight how different men and women are viewed when something sexual happens. Quite sad that is still the case!

I am sure we will get more series from Big Mouth as they can grow it as the characters get older and explore even more. I cannot help but watch as it does have a nice mixture of comedy in with everything else, the friendship factor as well. I am very interested to see what happens next in all honesty. It is one of the easiest series’ to watch on Netflix with the episodes being so short, you cannot help to binge watch it all very quickly.