The first image has been released for the much anticipated Lord of the Rings series from Amazon, it has been released as filming has finished in New Zealand. As I am a massive fan of Middle Earth I am therefore very excited about this series, especially when the same scale as Game of Thrones has been mentioned.

Here’s a date for your diary the premiere of the first episode:

Getting an email about this new POP figure is something that really excited me! As you should be well aware by now I am a massive Lord of the Rings fan and Gandalf is one of the greatest characters of all time. I really feel this needs to be my first big special POP figure!

“I would bear you, whither you will, even were you made of stone.” – Gwaihir to Gandalf

Gwaihir the Windlord, swiftest and greatest of the Eagles of Middle Earth has swooped in and rescued his long-time friend Gandalf and his companions on many an occasion.

That is right it has been confirmed that Amazon have bought the rights to Lord of the Rings to create a truly epic TV Series, they want to attempt to rival Game of Thrones and the success that has had in a similar type of set up.

The deal is said to be close to $250 million just to secure the global TV rights, so if they are willing to spend that much just on the rights just imagine what they are going to do with it!

END_OF_DOCUMENT_TOKEN_TO_BE_REPLACED

My 15 year celebration for Fellowship of the Ring continues with 15 incredible quotes!

END_OF_DOCUMENT_TOKEN_TO_BE_REPLACED

Its official I feel extremely old today as it is 15 years since Lord of the Rings: Fellowship of the Ring was released at the cinema. You should already know that this is the one film that changed it all! This was actually a really tough thing to do and only pick 15!

It really kick started my extreme love for film and wanting to watch as many as possible. I was blown away by the start of the adventure and forming of the Fellowship. It was showing us that when faced with great evil people from all different backgrounds will unite to stop it. I think that is reassuring if nothing else, we get to learn about the different people and our first look into Middle Earth.

The Middle Earth Peter Jackson managed to create really was something else, we get so many breathtaking shots throughout the film, so I thought as part of the celebration that I would pick 15 of my favourite. You will have to see if I mange to pick all of yours, or if I have missed something you love!

END_OF_DOCUMENT_TOKEN_TO_BE_REPLACED

This is inspired from the Ian McKellen obsession as well as the crazy news of the Ultimate Middle Earth Box Set being announced.

I can feel that a re-watch of the films soon Extended Editions of course! Along with plenty more blog posts. Not forgetting an inspired Blogathon! 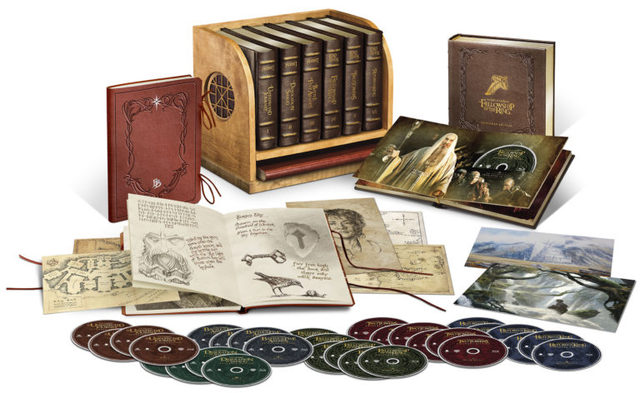 In the past couple of days it has been announced that the biggest ultimate edition of Middle Earth is going to be available. That includes all three Lord of the Rings films and all three of The Hobbit films.

On both Blu Ray and DVD extended and theatrical editions, as well as codes to download the digital versions of all films as well. A truly incredible thing that I would just love, but the price is a bit crazy $799.99! I haven’t currently found anything about the UK release.

Apparently though this is not the ultimate edition Peter Jackson wants us fans to have, he had something else in mind with new footage and special features. Maybe we have to hope that will still happen!

The second instalment of Bilbo Baggins and his adventure with the dwarfs to help Thorin reclaim the throne under the mountain from dragon Smaug. It picks up where The Unexpected Journey left off and we follow the group travelling across middle earth to get to Misty Mountains. It’s not a simple journey as they must head through Mirkwood forest and Lake-town, which means plenty of Elves and Men have now joined the tale.

END_OF_DOCUMENT_TOKEN_TO_BE_REPLACED

I just realised the other day that I have neglected how big an impact Lord of the Rings had on developing my love of movies, in this blog. It was “Fellowship of the Ring” which really started off not only my Lord of the Rings obsession but my movie obsession as well. Especially when I got the extended edition of the DVD and watched it hundreds of times over and over again. I watched all of the behind the scene features too, and even watched the movie with cast commentary on a few occasions. It also introduced me to Orlando Bloom, yes who I still found very attractive after I realised he did not have blond hair and pointy ears haha.

All of the behind the scene features for “Two Towers” and “Return of the King” have all been watched a lot and it really developed my love for movies and how much time and effort was placed into the elaborate making of these movies. It also made me want to visit New Zealand, it encouraged me to read the books and to take a big interest in “Middle Earth”, I had so many other books explaining the movie and the books. I also feel in love with Aragorn in both the movie and the books.

I still think to this day that if I had not become really obsessed with LOTR I would not be a massive movie fan, it really opened me up to how fantastic movies are and it really was just a fantasy series which you can totally get lost in. I really enjoyed how the movie encouraged me to read the books. I finished Return of the King before it came out in the cinema therefore some parts in the movie disappointed me a tiny little bit.

From then on, I also took an interest in reading books that I had seen the movie too, then trying to read books before the movie was released. Which either way is good with me, you can still love a book more than the movie even if you read it after you have seen the movie as they often take slightly different takes on the story.

I also took a massive interest in all of the actors in LOTR and get excited when I see them in something to this day, I even went back and watched some of there older stuff. So it really broadened my knowledge of the movies. I went and read “The Hobbit” as well and really cannot wait for the movie to be made, but I am a little sad that Peter Jackson is not making it. He done such an incredible job with LOTR and he would have with the Hobbit as well.

I hope that the trilogy is something that people will keep watching and enjoying a lot over the years and just love as much as I did on first viewings and still do to this day. I really should get round to writing reviews for all 3 movies. I just wish that I had this blog at the time when I really started to watch more and more movies.

So thank you to Lord of the Rings for making me the film fantatic that I am too this day.