A fateful night in their childhood would scar their lives forever. Sam Masterson left that night and on his return many years later he becomes drawn towards Martha Ivers and her husband Walter O’Neil.

END_OF_DOCUMENT_TOKEN_TO_BE_REPLACED

Rest in peace to legendary actor Kirk Douglas who has passed away at the incredible age of 103! Most well known for his starring role in Spartacus 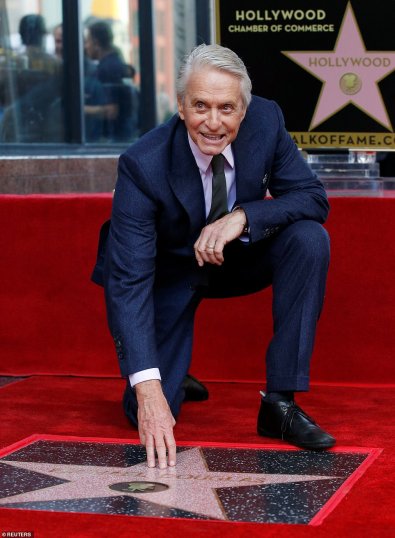 I’m sure I am not the only one that assumed Michael Douglas already had his star on the Hollywood Walk of Fame?

Well, he does now after receiving it in a ceremony yesterday!

Well this year the approach from the Academy was to have two young actors to host. This called upon nominee James Franco and Anne Hathaway to add a different edge to the Oscars ceremony.

The main theme of the evening seemed to be looking back at the past of the Oscars, taking into consideration how times have changed. Including music and some scenery from different Oscar winning films of the past. Obviously all eyes were on Franco and Hathaway, who in my opinion were very disappointing. Hathaway was given the over the top, in your face excited role while Franco just stood looking slightly upwards. Which made the audience feel awkward, he did not look comfortable on the stage at all!

The main part I actually thought was amusing from Hathaway had to be seeing “On My Own” claiming that Hugh Jackman would not do a duet with her this year. (After she done one with him when he was the host). Personally I would have liked to see Jackman host again! Or even Alec Baldwin who I thought was fantastic with Steve Martin last year. Baldwin was involved in the opening segment which poked fun at Inception and going into his dreams to steal hosting tips. This let us see Franco and Hathaway in many of the nominated films.

Yes whilst this opening was was amusing, it seemed to all go very downhill from that point. I didn’t even manage to stay up and watch all of the ceremony. The tiredness and boredness really did take over and I went to bed, didn’t think I would miss very much as no shocks had occurred with the supporting actor/actress awards. Have to mention Kirk Douglas who was rather heartbreaking to watch as he really struggled to get his words out, yet managed to still be so funny and likable.

In my opinion I found the show quite a flop.

What does everyone else think?

Live updates with my thoughts on the 2011 Oscars!

I posted pictures from this event a while ago when Michael Douglas received the lifetime achievement award and watched the video for the first time a few minutes ago. Which Catherine Zeta Jones makes a small speech and then sings a changed version of “One” from A Chorus Line. This results in a very emotional Michael Douglas.

Catherine Zeta Jones helped pay tribute to her husband Michael Douglas, by joining the cast of “A Chorus Line” on stage. 🙂 Jack Nicholson was there too, which makes me smile even more.

END_OF_DOCUMENT_TOKEN_TO_BE_REPLACED

I think this is really nice of Kirk, to look out for Michael so much 🙂

Veteran star Kirk Douglas told a teenage Michael Douglas he’d never make it as an actor – because he didn’t want him to experience the “rejection” of Hollywood.

The legendary actor was shocked when Michael initially decided to try out drama as a youngster – because his son had always maintained he would study to become a lawyer.

And when Michael took on his first play, Douglas Sr. tried to make him reconsider law school by criticising his performance.

He writes on his official website, “He attended college in Santa Barbara with the intention of being a lawyer. I was very happy. I didn’t want him to deal with the rejection in my field. In his sophomore year he suddenly said to me, ‘Dad, I’m going to be in a play.’

“I was startled. He never showed any interest in being an actor and I was glad. But I went to see the play at the college. It was a Shakespeare play and he had a very small part. After the play he said, ‘Dad, how was I?’ I answered, ‘Michael, you were terrible.’ And I thought that would squash any desire he had to become an actor. Which just shows you how wrong I can be.”

Michael, now 64, has since become one of Hollywood’s most successful stars, landing his first Academy Award, as a producer, at the age of 31.

I think this is such a nice gesture !!!

Generous movie legend Kirk Douglas hands every kid who graduates from the U.S. high school he sponsors a cheque for $500 (£333).

Douglas’ support for the California school, which offers troubled kids a second chance, prompted education bosses to name it after him.

And the Spartacus star makes a point of meeting and congratulating ever student who passes their senior year at the Kirk Douglas Continuation School.

In a posting on his MySpace blog, the 92-year-old writes, “A few weeks ago, I made a visit to the Kirk Douglas High School. I am proud that they asked to name their school after me.

“One of my pet projects is to try to inspire young people to at least have a high school education. Then, I try to encourage them to go to college. As a small inducement, I give every graduate a $500.00 check.

“When I spoke to the students I was surprised that they each gave me their personal pledge of what they wanted to do in life to improve our world: from volunteering in hospitals and local schools, to supporting our troops by sending letters and care packages. One student has agreed to help the elderly by volunteering at a convalescent center (I wonder if I inspired him). I am proud of the students of Kirk Douglas High School.”

Hollywood star Michael Douglas is ashamed he’s such a technophobe – because his 92-year-old father Kirk has his own blog.

Douglas is proud of the Spartacus star’s status as “the oldest blogger on MySpace” – but admits he doesn’t even know how to use email.

“About three years ago I had an email address, the email would go to my office and my secretary would fax me the email!”