Here is your change to own a LEGO Porg, let’s face it they look absolutely fantasic. 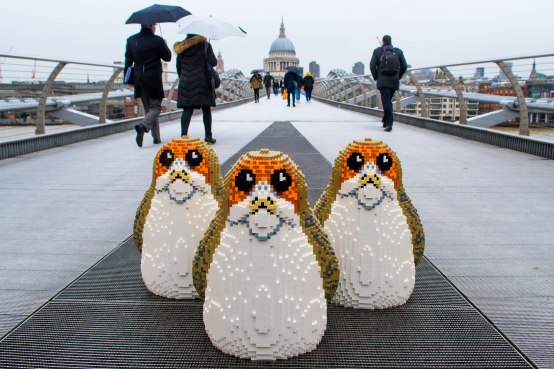 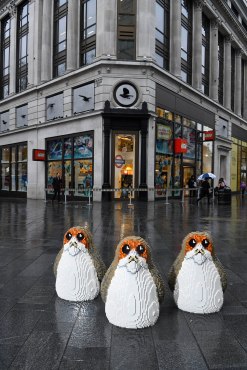 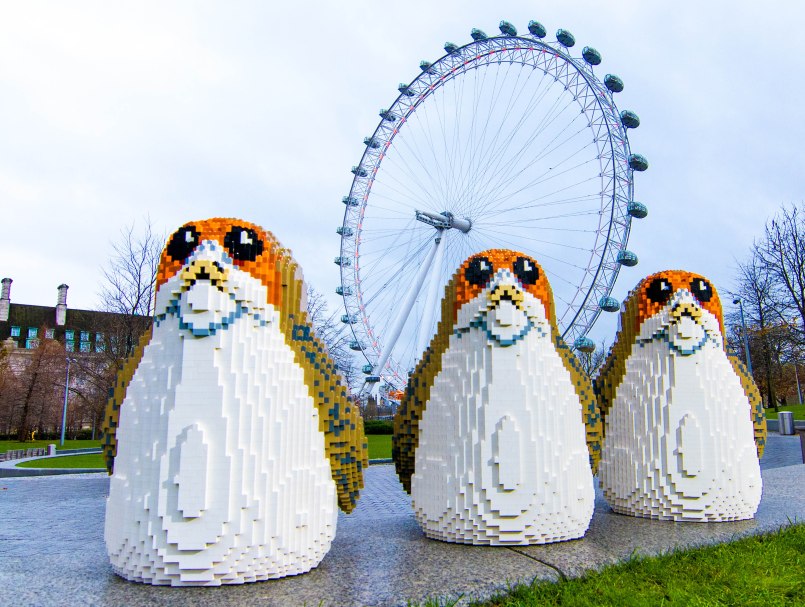 EDITORIAL USE ONLY Three ÔPorgsÕ, the latest characters to join the Star Wars universe, appear in from of the London Eye to launch the latest LEGO product range ahead of Christmas. PRESS ASSOCIATION Photo. Issue date: Tuesday December 19, 2017. Photo credit should read: Anthony Upton/PA Wire
Delighting fans nationwide, LEGO® has brought the real heroes of Star Wars: The Last Jedi to the capital London for fans of all ages

LEGO brings a group of Porgs – the furry new Star Wars critters that have set the internet alight – to London!
To launch the new chapter in the Star Wars saga, the brick-built sea birds took in the sights of the UK’s capital, including the LEGO store in Leicester Square
LEGO is also offering the public the chance to win their own, incredibly rare LEGO Porg this Christmas season.

To mark the arrival of Star Wars: The Last Jedi, LEGO® has brought the ‘real’ heroes of the film to the nation’s capital for fans of all ages.

A group of LEGO Porgs – the new Star Wars critters that have set the internet alight – have this week been seen travelling across London and taking in the sights as film fans across the country return to the galaxy far, far away in the latest chapter of the epic Skywalker saga.

LEGO is also giving the public the chance to win one of three of the uniquely built brick birds over the Christmas period*.

Until the 15th of January, members of LEGO’s free VIP loyalty scheme that buy a LEGO Star Wars set via shop.LEGO.com will automatically be entered into a ballot to be in with a chance to receive their very own LEGO Porg in the new year, the creature adored by stars from the film including Daisy Ridley, Mark Hamill and the film’s director, Rian Johnson – who created them himself.

The group (or ‘murder’) of LEGO Porgs travelled from London’s South Bank, across Millennium Bridge and past St. Paul’s Cathedral – before finishing their sight-seeing tour at London’s Trafalgar Square and the LEGO store in Leicester Square.

Just ten of the Porgs have been created – specially built by LEGO and Bright Bricks, a LEGO Certified Professional (LCP) company – for the launch of Star Wars: The Last Jedi.

LEGO PORGS – BUILDING FACT-FILE:
Each Porg took 20 hours to build, and contains over 8,000 bricks
Creating a combined build time of 200 hours for all 10 Porgs
The LEGO Porgs weigh approximately 16.5kg each
There are 8 different LEGO brick colours in each model, with each one standing 60cm tall

“It’s safe to say that film fans of all ages are going crazy for Porgs. We’ve not seen this much excitement for a new addition to the Star Wars universe for decades, so to bring the Porgs to life in brick form was a no-brainer for us here at LEGO,” said Alistair Galletly, Brand Manager. “The reaction from the public to these furry sea birds was incredible to see, and we can’t wait for three of these unique birds to go to happy homes in 2018.”

WHAT ARE PORGS?
Porgs are a new species to the Star Wars universe, appearing for the first time in Star Wars: The Last Jedi
They are a sea bird species, native to the planet Ahch-To – where Luke Skywalker hid in exile
The creatures build nests and are capable of flying
Male porgs are slightly bigger than female porgs; with baby porgs called porglets
The design of porgs were inspired by real-life puffins that live on Skellig Michael

*Competition terms & conditions
1. Overview: Individuals 18 and above can enter to win life-sized LEGO Porg
2. This Sweepstakes (the “Competition”) is sponsored by LEGO System A/S, Aastvej 1, 7190 Billund, Denmark. By participating in this Competition, Entrants agree to be bound by these Official Rules.
3. Eligibility: To enter this Competition you must be an individual aged 18 and above, a resident of United Kingdom, France, Denmark, Belgium, Germany, Sweden or Austria and submit a valid Entry to the Competition.

You are not eligible to enter if you are an employee, partner or immediate family member of an employee of the LEGO Group or any third-party company or agency directly connected with the creation or administration of this Promotion.