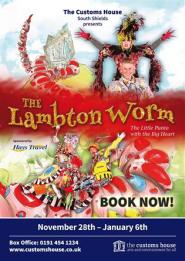 Many years ago now I remember seeing The Lambton Worm pantomime at The Customs House in South Shields and how different it was talking on a folk song from Sunderland and transforming it into a very unique Pantomime. When they announced doing it again this year due to it being the 150th anniversary for the song, I just knew I had to go and see this show!

The thing that I am always impressed with at The Customs House Panto is that they always have a mixture of current popular songs and references along with some much-loved older songs and this one even throws in “What is this Feeling” from Wicked so touching musical theatre as well as film and tv shows. Making sure that every one of all ages in the audience is going to know some of the songs and for many different reasons. It also then makes it a pretty much review of the year and recent weeks/months in entertainment. Which really does engage the audience as you know exactly what has been going on in the previous year, this is very much something to think about with the dancing.

Along with all of that which is fit around the story of Sir John Lambton who defeated the Lambton Worm after first putting it down the well! A new version of the story of course to fit in so many more characters and giving it the full pantomime treatment. Which also means plenty of close to the knuckle filthy lines and comments which if you are dirty minded will make you laugh a lot, don’t worry though the kids won’t understand them! The kids get to make plenty of noise with the traditional “behind you” and “oh yes we did, oh no you didn’t” moments as well as some slap stick comedy as well!

Arbuthnot is working with his mother Dame Bella Ballcock and they add the comedy value. We have sisters Susie and Penelope who take on the good witch/bad witch approach as they battle against one another when it comes to that worm! Not forgetting Puddles the Dog who is given the miracle of speech! Lord Larry Lambton and The Sultan both adding in more to the production, not forgetting Brave and Bold Sir John who falls for Princess Aneesa in a land far away from Cooksonville. All very much thought out and throw together to create a hilarious time at the Theatre.

Ray Spencer and David John Hopper really do work fantastically well together and seeing them trying not to fully burst out laughing when the other suddenly changes the line is just brilliant. I have grown up watching Ray Spencer from the Tommy the trumpeter days at the amphitheatre and then on stage at Christmas in the Customs House so I think personally this brings back plenty of childhood nostalgia for myself!

It really is such a fun panto trip that would be more than enjoyed by family members of all ages, so a perfect time to get together over the festive period. You will have plenty of laughs along with some very good singing and performances from the very talented (and local) cast members.

As it’s stated on the programmes and posters “The Little panto with the big heart” which I think has always been the case and it will always be the cast, with incredible prices you really do not need to look any further in the North East for a fantastic theatre Christmas pantomime experience! Well done to Ray Spencer and the gang for another truly fantastic show!

What are you waiting for . . . Go and find out more about that worm! BOOK TICKETS HERE

One thought on “Panto: The Lambton Worm (The Customs House – 2017) Review”