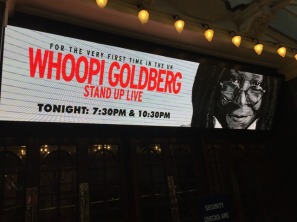 For the first time ever Whoopi Goldberg has brought her stand up show to the UK. Staging it at the London Palladium a place she feels she has unfinished business due to having to pull out of doing Sister Act the Musical on stage back in 2010 due to the death her mother. Making it therefore a fitting venue as she said her mother would have pretty much said “get your black ass on that plane” that opening really set the tone that her stories would be pretty personal. 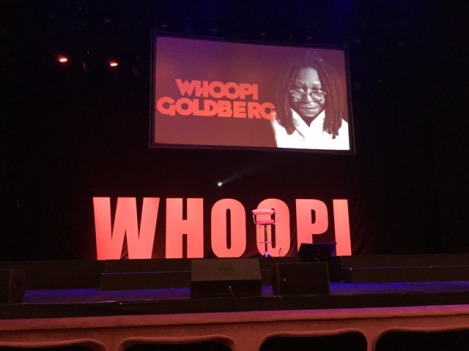 I managed to get tickets in Row D and in the central section so had an absolutely fantastic view of the stage. The build up to Whoopi appearing on stage was listening to Jumpin’ Jack Flash by the Rolling Stones and the Sister Act (film) soundtrack. Which I thought was pretty perfect planning from whoever was in charge of that. Certainly setting the scene and creating a good mood around the place.

She goes on to talk about how early she became a grandmother and then now being a great grandmother. Something that she admits is not great as she hates kids, this sparks quite a few rather funny stories as she is very open and honest about how she feels about them. Which you really cannot help but laugh at.

The stand up is then combined with some questions, which apparently were on Facebook (must have missed that) some people were in the audience and some were not. Some of the questions were a little bit strange as they asked what type of soup she would like to be and then eat herself. I think that was the craziest question.

The funniest one had to be “s***y breadsticks” with reference to Jumpin’ Jack Flash which she had no idea what it was about. Sparking the response of do you know how old I was when I made that movie? Which I thought was a pretty good point, while we all take great joy in watching her films over and over again she does not sit around and watch them herself. Some of them she has not even seen all the way through, which made me think that a lot of actors must just appear on the red carpet for a film and not actually go in and watch it. 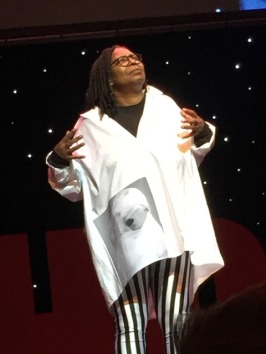 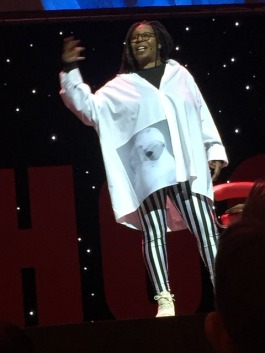 As you can see from the photos I managed to take, I wasn’t lying about the view! I got a little carried away considering I had only used my phone a couple of times but just kept pressing the button! She really is something else and the facial expressions to go on with stories and actions were just great.

One of the better questions was about the hosting the Oscars and that led to a nice story relating to Robin Williams and Billy Crystal who sent her flowers with “kick” on one card and “ass” on the other. Which certainly is a lovely thing to hear about them, she did say the censors weren’t happy she was hosting though and constantly watching what she was saying.

It’s not every day you get the chance to see an Oscar, Grammy, Tony and Emmy award winner on a stage doing a stand up show. It was more than worth the money paid for the tickets. Just to be in that theatre and listen to her was something special. She talked about turning 60 and what happens as you age. With the mix of questions and stories with the stand up it did feel more like an audience with, which is a compliment to how enjoyable it really was!