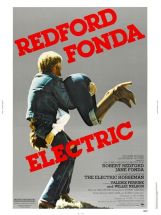 Sonny Steele was a big rodeo star, a five time world champion but after retiring and finding out his next appearance is going to be on a Las Vegas stage covered in lights with the horse drugged incase it doesn’t react well he decides to take matters into his own hands and disappears with the horse!

Sonny Steele does not really come across as very likeable to begin with seems to just be a drunk who was successful in the past. But over the course of the film he really does grow not only as a character but as a person when you realise exactly why he has decided to well take the horse. The intentions are truly the best and you cannot fault him for doing his best to save it. He gets very attached to Rising Star, although it makes you wonder just how someone could stay hidden when travelling with a horse, only a few select people seeing him.

Journalist Hallie is not going to give up on the story and does some great detective work and manages to keep finding where Sonny is next, eventually he has no choice but to let her come along for the ride. Even though to begin with that is not what he wants, it keeps swinging backwards and forwards to whether she will actually get any of the story on the news.

Jane Fonda was a perfect match for Redford, not only do they have great chemistry with one another but they work very well together as well. The scenes between the pair were certainly the highlights in the film. Even though it was obvious from the very start that a romance was going to be happening between the pair, the build up and it eventually happening was just as satisfying. The tension they create really is something special, in a film that doesn’t really have a massive amount else going on. The main storyline is pretty straight forward so it was good to see that it had that added bonus of a rather intense love building up.

It is fantastic to know that Robert Redford actually did all of his own riding stunts and fell in love with the horse so much that he actually kept it, taking it home for the rest of its life. So if you didn’t already love Redford I am sure you do after that little fact! He really is becoming one of my favourite actors to watch and if you can recommend any much watches for his film archive that would be fantastic!

The Electric Horseman is released on DVD in the UK on 17th October 2016, rating PG with a running time of 121 mins (approx).