Footloose is a fun show. That is certainly the first thing you have to say about this one as it really is. I am sure everyone already knows the story from Footloose, but just incase I shall refresh your memory.

Ren McCormack has been living in Chicago and is devastated when he must move to a small town with his mother after she separates from his father. The problem with this town is that there is absolutely nothing to do. Oh and music and dancing are well against the law. I am sure we can therefore work out what Ren is going to do, that’s right rebel and cause chaos amongst the other teenagers in the high school he is attending.

This was the first time I have managed to catch Footloose on stage and I thought the production was put together in a very good way, with some impressive features on the set. The actors were playing the instruments live on stage, but I thought that kinda went against the story but it was still good to see. More and more musicals seem to be heading in that direction I have noticed in recent years. 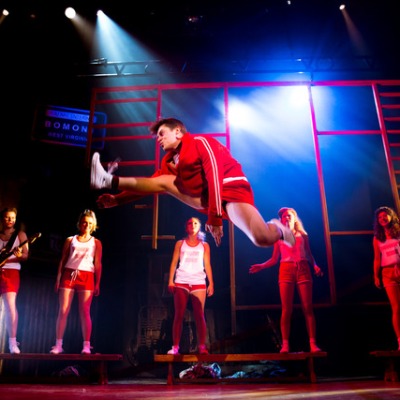 Luke Baker had the lead role as Ren McCormack and he was easily the standout performer in the show. His acting and vocal range were such a pleasure to watch, I thought he took on the character so well. I could have easily gone to see the show again to watch how great he was in the role!

My 13 year old self was super excited to see Gareth Gates live again, the last time was the tour after Pop Idol! back in 2001. He certainly gets the most laughs as the bumbling Willard and just wait until you see his body! It is fantastic to see that he is still performing and enjoying it. Certainly someone I will always have such a soft spot for, he really is great in this role.

That was something about the whole show everyone looks to be having a great time, which I guess is helped by the very upbeat nature that it has most of the time. Don’t get me wrong though as we get some truly emotional songs and moments as well. Maureen Nolan and David J. Higgins taking on most of those moments and were well pretty great as well. I enjoyed seeing Nolan in a different type of role after seeing her in Blood Brothers a few years back.

Obviously the title song is very well known, but from my days of listening to musical soundtracks I recognised a few of them and I will admit that my favourite from this show certainly has to be “Lets’s hear it for the boy” which was so enjoyable to eventually see live on stage. When singing “Holding out for a hero” Hannah Price showed what a talent she is with such a strong performance, I was really surprised to find out that this show is her professional debut she looks so comfortable and at home on the stage. I will certainly be closely following to see what she does next.

I also loved seeing Steve Rushton in another show this year after heading to see American Idiot twice in one week I recognised him straight away. He certainly knows how to play that guitar!

It is coming to the end of its current UK tour and it has been going for most of the year, really is worth a watch and I will certainly opt to see it again in the future! Obviously you get to dance and sing along at the end!

One thought on “Footloose: The Musical (UK Tour) Review”