This year I signed up to become a Friend of the Theatre Royal which means you get discounts for the Theatre tickets, priority booking and other perks. Such as Inside View events, I had no idea about these until getting my first newsletter ahead of the new season going on sale. When I read about them thought it sounded very interesting getting an insight into a show and possible appearance by cast members. As soon as I saw that one was down for No Man’s Land and £2 more expensive than normal I just had to go for it and hope Ian McKellen and/or Patrick Stewart would be involved.

Following on from the fantastic Stage Door experience (McKellen/Stewart) the excitement was certainly building as we went to the event in the Olivier Suite in the Theatre. Who would actually be attending we still had no idea. The event was due to start at 3pm, you have the chance to get a cup of tea/coffee and a cake to go along with it! When it got to 3:10pm the Stage Manager got up to speak and informed us that “Ian, was waiting for a taxi” – OMG yes it had been confirmed that Ian McKellen was going to be one of the actors attending the talk! Along with Owen Teale, and they just happened to both arrive at the Theatre at the same time.

So the idea behind the Inside View is to get the opinions of the actors/cast members into the show and what it is like for them playing the characters. You also have a chance to ask any burning questions that you might have. It was fantastic and both Teale and McKellen came across very well and certainly helped fill in some gaps having seen the play on Wednesday evening. Interesting to see how you perceive something and if it links together with what the actors, director and production team were going for. It felt such an honour to be sat in the room and listening to how the production came about and why it was important to tour the show.

McKellen was very passionate about how actors touring and travelling to other cities and venues had such a huge impact on his life that he pretty much enjoys doing the same thing. I could have honestly sat and listened to him all day! Teale was equally as engaging and they certainly have a good friendship and respect for one another which was great to see.

They stayed longer than they were supposed to and were more than happy to ensure that every question people had was answered (not many were asked in all honesty, think everyone including myself were just happy to be in the room). I will certainly be checking to see if I can attend any more of these events in the future, as throughly enjoyed hearing actors talk about Theatre and help piece together the play I had recently seen. A fantastic way to let people in and experience another level to the Theatre going world. 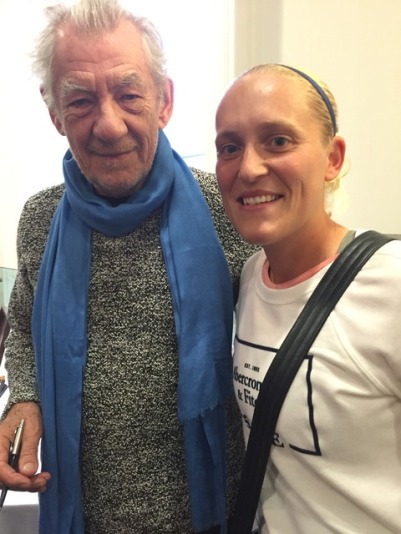 An added bonus of some more photos as well, what a fantastic Theatre few days!

6 thoughts on “Inside View: No Man’s Land”