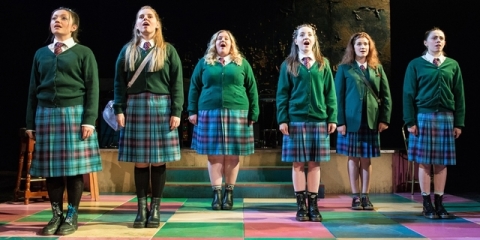 A group of Catholic school girls are heading from the small town that doesn’t have very much at all to Edinburgh for a choir competition. The choir competition is the last thing on their minds though as they want to go wild with drinking, sex and McDonalds.

The music varies from choral music by Bach and Handel as well as a selection of ELO covers which all fit together so well with the different moments and antics from the young women. All fitting in with the story, as messed up as it goes at times the music offers some relief to take away from the edgy and very inappropriate moments. Based on a book called The Sopranos.

The play is acted with only the six female performers who also double up at times as the horrible and disgusting men they encounter on the trip and at a nightclub back home. Which takes a little bit of getting used to but created many hilarious moments. It has plenty of bad language so if you go to see it please be prepared for that with a lot of use of the dreaded “c word” which is not really massively needed in all honesty. Sometimes is swearing over done?

Not forgetting to mention the very small band of four ready and waiting at the back of the stage to accompany the group for the outburst of song!

That does create more humorous moments but the strong performances from each actress really do blow you away at times. As the story goes on we get a snapshot of each girl as they then take centre stage to tell more about their current story and what they want to do with life. Incredible performances and a range of vocals from all involved I certainly felt like the standout performances came from Frances Mayli McCann for her vocals, had the lead on a majority of the songs. Then Dawn Sievewright with her acting especially as she had the job of narrating certain parts as well. Not taking anything else way from the rest though as they work incredibly well together and look so comfortable on the stage.

I found the costumes and especially the hairstyles as I total reminder of the late 90s and being in secondary school. The scrunchies and more importantly those little clip things as worn by Manda, something little but it really amused me as totally forgot about that phase. The clothes as well, when they decided to get changed out of uniform was a good homage to that time. 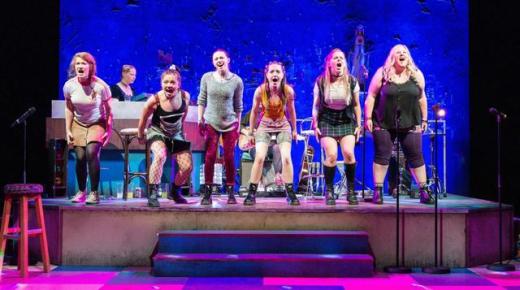 I guess we can relate to those last couple of years in school though and the way some people would go on and talk about men and would drink a lot. But this also highlights that a lot of it might have been put on and for show to look cool. Something that is reassuring and maybe that is partly why this play has been so groundbreaking. My immediate reaction when it finished was “that’s different” but that is not in a bad way. Different is good especially when you see something on stage for the first time.

The play comes from the National Theatre of Scotland with the company touring extensively around Scotland now the UK and worldwide even having a stint in America. A running time of 1 hour and 45 minutes without an interval. I do like very much the balance of it being a musical play, as the songs are perfectly placed with great balance. I will be following closely to see where this play goes next and how it is received.

2 thoughts on “Our Ladies of Perpetual Succour (UK Tour) Review”