The stage was alive with the sound of music with songs I have loved for over 20 years. Ok that was a poor attempt to change the lyrics, but I just thought I better explain that I really love The Sound of Music. It is a pretty perfect musical and I certainly class the film as one of my feel good films. Maybe a strange thing about something that has Nazi’s but it also has incredible songs and Julie Andrews.

This was my second theatre experience of the show. The first being after Connie Fisher won How Do You Solve a Problem Like Maria? Which was the first TV series to find a West End star. At the London Palladium as well. I am very happy to say that the show still has plenty about it, you know what your going to get from the songs and its then the performances to look at and enjoy. 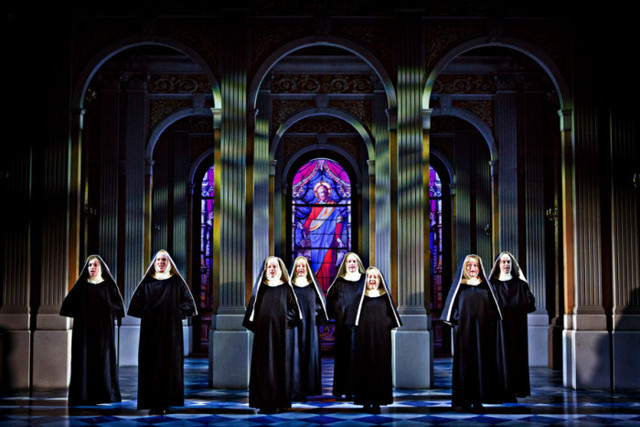 You cannot fault the mood the show created from the very start with the nuns appearing and the vocals were fantastic. Leading the charge as Mother Abbess was Jan Hartley. She absolutely blows the audience away, I had a feeling she was going to be incredible very early on with her part in ‘How do you solve a problem like Maria’. I was therefore very excited waiting to hear her rendition of ‘Climb Every Mountain’ and it was incredible. What a way to close the first act! An amazing voice and it really is such an emotional song and moment.

Lucy O’Bryne was given the tough task of becoming Maria. She was brilliant, had all of the charisma and charm mixed in with the navie character. She really brought her to life on stage. I was massively impressed especially as I had never heard of her, didn’t watch The Voice which she came runner up of last year. I certainly think from this a musical theatre star is born. It looks like she throughly enjoys being Maria and that makes it even better to watch. It cannot be an easy role to take on when everyone will constantly be comparing you to Julie Andrews, I felt O’Bryne made the role hers and it was a true pleasure to watch.

This is one of those musicals that you cannot help but feel happy when your watching. I love the songs that are not in the film version and give Baroness Elsa and Max bigger roles. Especially ‘How can love survive’ that was a song I listen to loads after seeing the London production years ago. Lucy Van Gasse was another I was massively impressed with. I feel that role has much more depth in the stage show and we actually feel sorry for her as Captain Von Trapp picks Maria over her.

That leads to Andrew Lancel as Captain Von Trapp. In one of those moments the whole theatre was trying to remember where they recognised him from, that’s right he was the evil one in Coronation Street (again something I don’t watch). I thought he was very similar to Christopher Plummer in the film version, but at times we could have had a little bit more. Had good chemistry with the other cast members. The children were all fantastic as well, really having great stage presence with all of the songs and moments very impressive.

The current UK tour still has plenty of months to go so I really do think you should head to see it Hartley and O’Bryne really do make it more than worth while! Who doesn’t want to see These are a few of my favourite things performed live on stage, a fantastic production!

4 thoughts on “The Sound of Music (UK Tour) Review”